The Films Franco directed for Robert De Nesle were difficult to see for many years, and I remember being slightly disappointed by them when they did come back into circulation, by Les Demons (1972), by Plaisir a Trois, even by La Comtesse Perverse (both 1973). There are some key works among this set though, and none more so that Les Possedees du Diable, or Lorna . . . The Exorcist (1974). Essentially a Faustian tale of a struggling businessman who trades the soul of his unborn daughter for wealth and power, it’s quintessential Franco: hypnotic, transgressive, perverse.

Opening with shots of fruit ripening on the vine, the first ten minutes of Lorna are comprised of lesbian lovemaking, albeit something feels off, something’s not quite right. For a start, the older woman – there is a disparity in the ages of the two women – is wearing an obvious wig and eye make-up that extends onto her forehead, and her partner – who we first see looking on through a window – seems to enter the room without the use of a door.

Resolving with a shot of the latter, now fully dressed and lost in revery, we realise that everything we have seen thus far was imagined, that Linda (Lina Romay) – our daydreamer – is actually on the cusp of adulthood, about to turn eighteen, and intent on a holiday to celebrate. Her father, Patrick (Guy Delorme), talks of Rio, of Rome, but his tone changes noticeably when he receives an ominous phone call instructing him to take the family to Camargue instead, and reminding him of his commitment to hand over his daughter on her eighteenth birthday.

I’ve spoken about the idiosyncrasy of Franco’s work elsewhere, and while it’s not generally my want to dwell on onscreen outrages, in this context it’s meaningful to do so. As Stephen Thrower has pointed out, Franco seems drawn to the female reproductive apparatus above all else, repeatedly foregrounding and zooming into the centre of the woman’s pleasure. As such, the scene with the crabs – which we assume were ‘placed’ in Patrick’s wife as a warning to him – would seem to be a particularly personal nightmare.

The affronts to morality continue – perhaps dialled down a little – in the following scene, when Patrick opens the bathroom door to find his daughter – if we can still refer to her as such – taking a shower. While he is understandably uncomfortable, she seems unfazed, perfectly happy to present her nakedness to him, even to flirt with him. Of course, this is not the first time Franco has explored incestuous themes in his work – one need only think back to the Eugenie films of 1969 and 1970 – but the presentation had never been as graphic as it is here.

“I don’t believe in God, the Devil or Satanic pacts.”

Lorna – the film rather than the central character – is often referred to as ‘unhealthy’ (one could even use the term demented) and the scenes and themes discussed thus far go some way towards explaining why. They only tell half the story though, and cannot fully account for the queasy atmosphere that pervades from the first shot to the last.

We mentioned earlier that something feels ‘off’ during the lengthy opening scene, and André Bénichou’s plaintive main theme communicates that as powerfully as anything we see on screen. Two women are making love, and while one of them looks slightly strange, we don’t know anything about them. We feel uneasy though, melancholy even, due to the haunting score. Elsewhere bizarre electronic effects – most likely a guitar running through some sort of pedal – help to establish an otherworldly tone, reinforcing the point that strange forces are at play.

It’s worth remembering that Gerard Kikoine constructed the soundtracks for many of the De Nesle productions using library tracks. I don’t think that was the case here – I believe the score to have been composed specifically for the film – but we cannot know whether Franco had any involvement. I imagine he would have approved though, as it fits the film perfectly.

The choice of locations also contributes significantly to the sense of strangeness. This, of course, is one of Franco’s trump cards – finding shooting locations which add atmosphere and production value he would not be able to secure by other means. In this case shooting took place at ‘La Grande Motte’ in the south of France, a purpose built resort intended to rival those of the director’s native Spain. Designed by Jean Ballader and apparently inspired by pre-Colombian pyramids in Central America, the gleaming white, modernist architecture has a slightly alien feel to it, at least as presented here.

Considerable credit must go to the director for the selection and utilisation of this unusual environment, which extends to manipulating the frame rate as Patrick passes through its geometric structures towards his final showdown with Lorna. Lorna herself seems to move to a slightly different rhythm at times, almost gliding through a crowded nightclub and out into the sun-drenched streets, though this is a result of her performance rather than technical effects.

With regards to the cast, the performances of the principles are actually very good here, with Stanford embodying the otherness of the Devil’s representative, Delorme convincing as the man fighting to save his family and Laurent as the woman determined to stand by him. Particular praise should be reserved for Romay though, for taking Linda from excitable adolescent to cold-blooded killer. She also seems genuinely changed by her first encounter with Lorna, and does a good job of conveying madness during the film’s memorable closing moments. 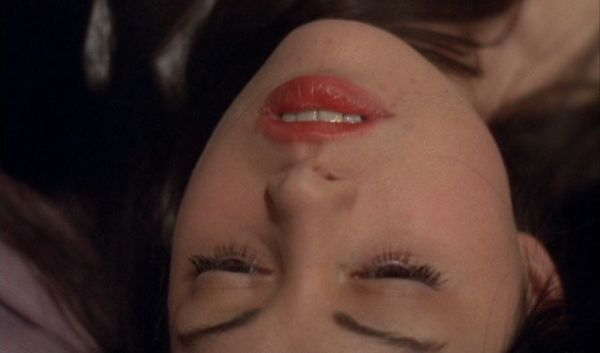 Lorna is a wonderful film – it’s daring, deviant and disturbing. It’s also a film which bears traces of those that had gone before, and which would in turn echo through those yet to come. Tim Lucas once opined that, in order to see one Franco film you have to see them all, and while I suspect this was said somewhat tongue in cheek, a familiarity with the broader body of work does tend to enhance the appreciation and understanding of individual films, whether that’s due to recognising recurring themes and techniques or simply nods and winks. For example, ‘Lorna Green’ is also the name of Janine Reynaud’s character in Succubus (1967), a film which also deals (somewhat obliquely) with demonic possession. The subplot here – in which a mysterious patient hears voices from a master who has abandoned her – recalls a similar thread in Vampyros Lesbos (1970), and the deathblow dealt by Linda / Lorna in the final sequence recalls a similar attack in She Killed in Ecstasy (1970), which itself recalls the aforementioned Succubus and bring us full circle.

Reference to Friedkin’s film obviously makes sense given the similarity between the titles and the release dates. Actually, if I had to liken Lorna to an American horror film it would probably be Herk Harvey’s Carnival of Souls (1962), which also manages to conjure a nightmarish atmosphere seemingly from thin air. Strangely, Candace Hilligloss – who plays the lead – bears a passing resemblance to Pamela Stanford.

It’s notable that, in addition to the gynaecological shots, two important scenes end with the camera peering deep into Linda / Lina’s open mouth.

The same names are used again and again in Franco’s filmography, generally to indicate types rather than returning characters. Certain images recur, even certain musical cues are reused, presumably with permission. Costumes – or at least, elements thereof – would also appear from one film to the next, especially during this period. For instance, Lina wears the same knee-high here as she wore in Female Vampire and Exorcism.

In terms of resources, I consulted the following prior to writing this piece:

The interview with Stephen Thrower, which appeared on Mondo Macabro’s 2010 release of the film.

The interviews with Pamela Stanford and Jacqueline Laurent, which appeared on Le Chat Qui Fume’s 2018 release of the film.