Three hooded men draw blood from a similarly-hooded, but otherwise-naked woman. A chiffon-clad brunette is pursued through the streets by four men wearing animal masks, and an Asian woman in a sheer body-stocking dances provocatively for three middle-aged men.

In 1997’s Virgin and Vampires, director Jean Rollin explained that he wanted his second feature to be ‘easier to understand’, a ‘well-made, traditional mystery film’. The resultant film, La Vampire Nue, isn’t really any of these things. 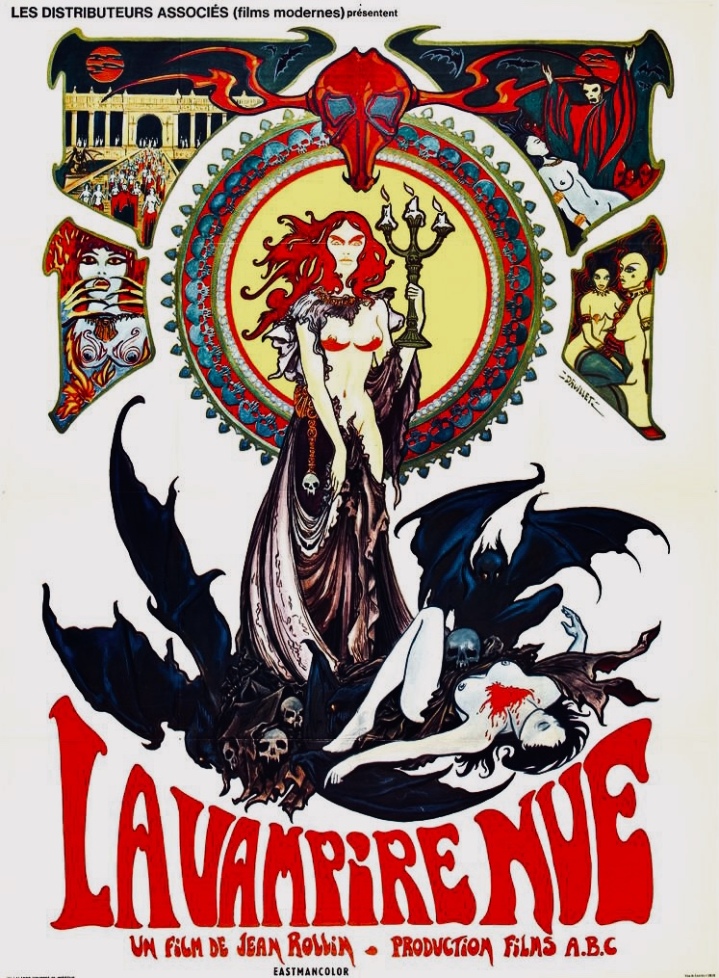 The pursuit of the chiffon-clad girl – she is not given a name despite being the semi-naked, pseudo-vampire of the title – is witnessed by a young man, Pierre, who can only look on in horror as she is shot by the masked men. He follows as they carry her through the streets to the townhouse of his father, Radamante, only to be refused entry. He returns the following night with an invitation stolen from another man, and finds himself privy to of a curious ceremony. A photograph of a fellow guest is projected onto a screen, at which point she is handed a gun and, with a smile, shoots herself in the head. The remaining guests don blue hoods, and the girl Pierre had seen shot the night before reappears, seemingly alive and well.

“Do you understand all this?”

It had never occurred to me, over the course of multiple viewings, that I was watching a film intended as a mystery, although there are certain elements that we might associate with the genre: the startling event – in this case, a shooting – and the eye-witness, intent on investigation. I’m not sure there is much by way of suspects though, with it being clear early on that Radamante is involved, if not exactly how. I also think the film’s aesthetics and execution work against it in this context, particularly the aesthetics. The film is so strange from the outset, so far from realism, that the viewer seems unlikely to invest energy in trying to unravel the mystery of a girl who can survive a gunshot but must apparently be protected from the sight of a human face. With regards to execution, it seems to me that an effective mystery would use clues to engage the viewer, and I’m not sure that happens here. Instead we have a series of bizarre, inscrutable scenes followed by short bursts of verbal exposition. It could be described as ‘mysterious’, but probably not as a mystery.

What about Rollin’s other stated objectives – for instance, that the film should be well-made? I think the jury is out there as well. The scene at the very beginning, in which the girl is pursued by men in Judex-inspired masks, is very effective, with the latter casting long, surrealistic shadows across the urban backdrop. There are other notable instances of cinematic technique, such as the scene in which Robert – Pierre’s artist friend – paints a nude model, a scene which demonstrates a fine sense of composition and montage, presumably on the part of Rollin or cinematographer Jean-Jacques Renon. Coincidentally – or perhaps not – neither of these scenes feature any dialogue, which adds to the overall strangeness of the film, to its peculiarity. On the other hand, the few moments of violence – the suicide, the confrontation between Solange, one of Radamante’s entourage, and his ‘loyal little puppies’ – are painfully unconvincing.

The acting is also relevant in this context – in terms of the film’s ability to convince. Olivier Rollin – Jean’s brother – is almost totally expressionless as Pierre, as is Caroline Cartier as the titular vampire. The Castel twins – who look fantastic here, as Radamante’s aforementioned puppies – are blank to the point of appearing drugged, which makes one wonder if the director actively sought non-performances from his cast. Pierre barely responds to the news that his father has arranged the murder of his best friend, or to the discovery of stranger wearing a cape in his father’s newly-acquired chateau. Is this the result of incompetence, inexperience or directorial intervention? It’s not clear, but if the affectless acting is a matter of style, the message seems not to have got through to Maurice Lemaitre, who plays Radamante, or Ursule Pauly, who plays Solange, as their performances are much more conventional.

“I’m still waiting for your explanation.”

While the film is going to strike most viewers as strange – perhaps incomprehensible, even incompetent – it’s certainly not without merit and probably a better introduction to Rollin’s universe than Le Viol du Vampire. For a start, Rollin’s aesthetic – and I appreciate I’m using the word a lot but it is at the heart of his cinema – is further developed here. We have the first iteration of the two, codependent girls motif, which would recur in many subsequent films; the surrealistic flourishes of masks, hoods and bright red coffins; the stylistic influence of comic books, particularly during the ubiquitous footage on the beach at Dieppe, in which those who have freed the girl are seen with blue faces, with wigs, with red capes. We are a long way from the trappings of the Victorian era here.

On the subject of the group who claim the girl as their own, who set out to free her from the control of Radamante and his accomplices, their appearance reminds me very much of hippies, with their body paint, long hair and denim. By contrast Radamante and co. are middle aged, monied and well-dressed, an obvious point of contrast. There is a lot of talk of ‘them and us’ throughout of the film, of being ‘one of us’, and I wonder if there is a class element to the conflict here, or more likely, a generational one. If that is the case, it could almost stand as a metaphor for the emergence of the new vampire films in the seventies, for the supplanting of those of the fifties and sixties

WordPress does not lend itself to footnotes, but the following were consulted in constructing this review:

Tim Lucas’ essay, which accompanied Redemption’s release of the film In the US.