The roots of Rollin’s fifth feature can be traced back to a visit he and cinematographer Jean-Jaques Renon made to a cemetery in the provincial French town of Amiens. As time moved on and daylight faded, they found themselves disorientated, unable to find their way out and facing the possibility of spending the night there. The episode served as the inspiration for the Rollin-penned short story ‘La Nuit du Cimiterie’, which in turn formed the basis of the divisive La Rose de Fer (1973). 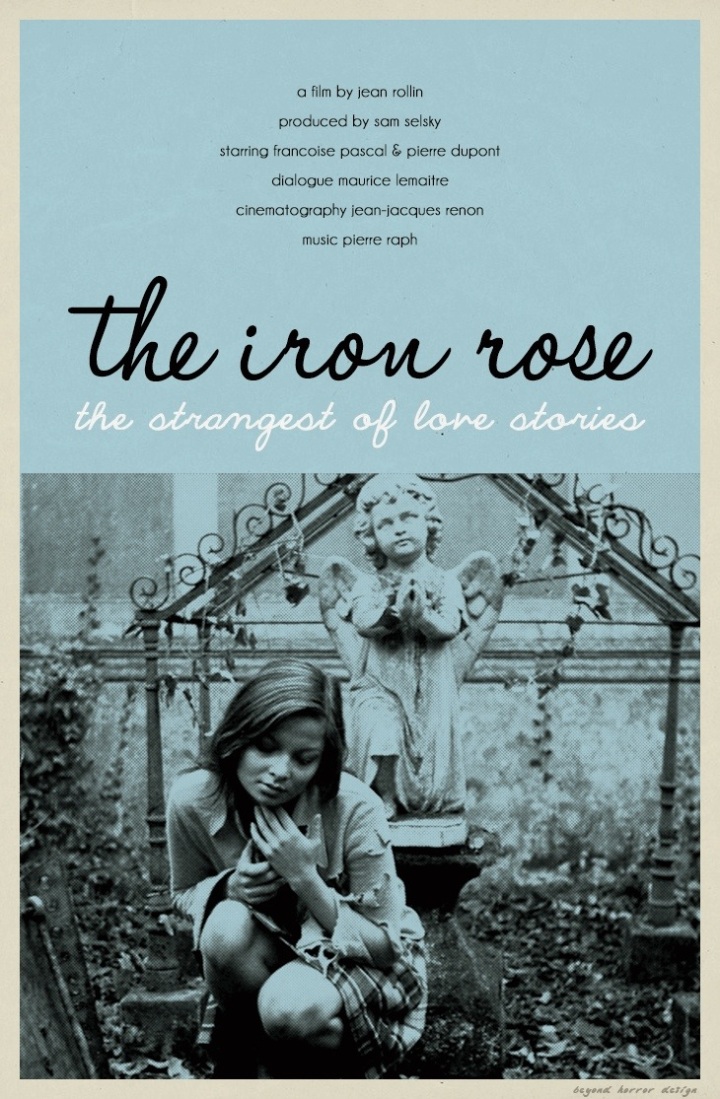 The film follows two young people who meet at a wedding and resolve to spend the following day together. Having set out on push bikes, they stop for a picnic in a large, somewhat unkempt cemetery and dare to venture below ground into an unlocked crypt. Returning to the surface and finding the sun has gone down, they are unable to get their bearings or locate an exit. They panic, they run, only to find themselves back at the aforementioned crypt.

“Don’t worry – the dead are our friends.”

Rollin maintained in later years that he was determined to make a film without commercial concessions, regardless of the implications for the box office. Having already made two successful soft core films – Jeunes Filles Impudiques and Bacchanales Sexuelles (both 1973) – and signed a contract to direct a number of hardcore features, he financed La Rose de Fer himself, securing total creative freedom in so doing.

The result would seem to be pure Rollin, with its languid pacing, cemetery setting and focus on the accoutrements of death. It differs from the preceding quartet in several respects though. For a start, it would be difficult to describe it as a horror film, and while I might not describe the others in those terms either, they are certainly genre films, with their virgins, vampires and isolated chateaus. There is none of that here, and while (what may be) a vampire and clown do fleetingly appear, they are mere nods to the director’s previous work, their swift departures an acknowledgement that they have no place here.

This film also looks very different to the others which is due in part to the absence of genre trappings and in part to the greater confidence of those behind the camera. It’s also due in part to the acting – in large part – which is objectively better than we have seen to date. The extent to which either of these are positives will depend on your perspective though. For instance, I personally like the somewhat campy aesthetics and affectless acting of the first four features, feeling they add to their strangeness. It’s no surprise that the leads here – Françoise Pascal and Hugues Quester – would go on to have successful careers in front of the camera though. 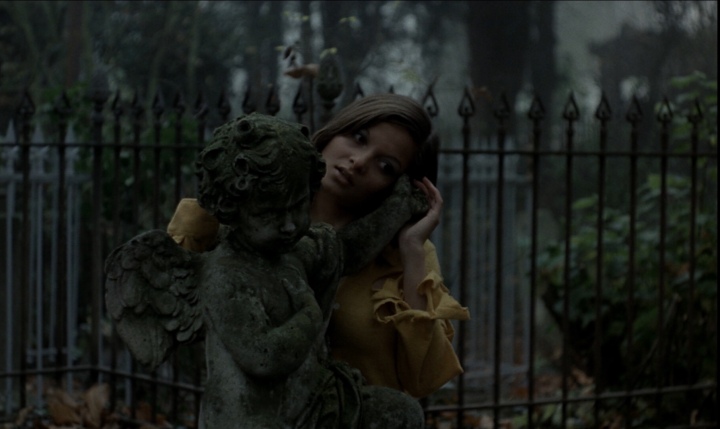 Fundamentally La Roses Fer is a story about two people faced with an obstacle they are unable to overcome, and while his (he is not given a name) response oscillates between anger and fear, it is hers which guides the film. Rollin spoke of her as a tragic figure, projecting her frustrated feelings for him onto the dead, and this manifests itself as a prolonged delirium, with her staring into space, talking to the dead, playing with their bones. There are even suggestions that she has entirely lost her sense of time and place, referring to them – the couple – being in a field at one point and visualising herself alone on a beach at another.

I think the extent to which one accepts this breakdown will go some way to determining one’s response to the film as a whole. The leads are given very little by way of backstory, meaning we have no real knowledge of her mental state going in. On the surface, she is a normal, well-adjusted young woman, in which case her disintegration seems to come on very quickly. There are indications early on that she is interested in metaphysical matters – the two discuss the presence or otherwise of the soul while walking among the dead – but sadly this is never followed through and cannot in itself be taken as indicative of the mental fragility from which she presumably suffers.

The dialogue in general is something of a missed step for me, at times quite poetic but often redundant. While the basic story is by Rollin, the dialogue is credited to Maurice Lemaitre and I can’t help thinking that it’s rather overwritten. We know they’re lost, that she is slipping away, and don’t need to be continually told. One wonders if the middle section would have been more effective had the dialogue been used as sparingly as it was in Requiem pour un Vampire, or indeed as sparingly as the rather ominous, experimental score here.

I should emphasise, the overwhelming majority of the film is comprised of two characters in one location. Other people appear fleetingly – as we said, our couple meet at a wedding – but they cannot sensibly be described as characters and are of little to no narrative significance. The cemetery could probably be described in those terms though, given its transformation and the role this plays in the breakdown that gives the film its momentum.

Beautiful in its decay by day, it’s not entirely clear whether Rollin intends the nebulous, impenetrable landscape it becomes by night to be a trap from which there is no escape or something more prosaic. If it’s the former, I think more could have been done with the cinematography to make that clear. There is one beautiful shot in which the camera pulls back behind the leads to reveal the silhouetted mass of headstones and vegetation confronting them. In general, the nighttime scenes are very dark though. That may be the point – the couple are trapped because they can’t see where they’re going – but certain shots would have more impact if they were clearer. The repeated, inadvertent returns to the crypt, for example.

In fairness to Renon, the first twenty minutes or so are absolutely beautiful. Before setting out for their picnic, the couple meet at an otherwise-deserted train depot, in which anachronistic locomotives are shrouded in the midst of the early morning. The daytime shots of the cemetery are also a joy to behold, with the autumnal browns, rusted railings and weather-beaten stone contrasting with the brightly coloured clothes of our modern lovers. Perhaps it was a pragmatic decision not to reveal too much of the grounds at night, not to risk shattering the illusion by inadvertently revealing paths and exits we are not supposed to see.

With regards to the use of the camera itself, it’s generally quite restrained, with movement consisting primarily of some elegant glides around the headstones. One very notable exception – well, strictly speaking two – occurs at the beginning of a memorable scene in which the protagonists embrace in an open grave, atop assorted (actual) human bones. He has fallen in, and before she jumps in to join him we get two POV shots – him looking up at her, her looking down at him – during which the camera rotates 360 degrees. They’re striking shots, though it’s not clear whether they’re intended to communicate anything in particular. If they are intended to convey the couples changing views on one another, they’re ten to fifteen minutes too late.

Going back to the films locations, we see a series of shots at the very outset which present Amiens as deserted, as a ghost town. When we do get to see its inhabitants – at the aforementioned wedding – their clothing evokes a previous decade, suggesting from the beginning that our leads occupy an environment to which they do not belong.

“Is it the sadness that scares you?”

As predicted, La Rose de Fer performed poorly at the box office, struggling even to find meaningful distribution. There are those who now describe it as a masterpiece – Tim Lucas among them – but for me that’s a serious overestimation. Indeed, of all Rollin’s ‘seventies output – I’m referring to the films he directed under his own name – it’s the one I like the least. The intention had been to make a film that was both personal and profound, and while I can accept it as the former, I struggle to see it as the latter. It doesn’t speak to me of the human condition in the way I think it is suppossed to. I also think the paring down of the narrative and resultant foregrounding of the characters is a problem, because it doesn’t play to Rollin’s strengths as either a writer or director. He is primarily a visual stylist, which gives his genre films a look and feel all of their own. I think the absence of those frameworks – the absence of those foundations – hurts La Rose de Fer, which isn’t scripted or structured well enough to stand without them.

Rollin apparently also took inspiriation from the poems of Tristan Corbiere, one of which is recited by Quester at the oft-mentioned wedding.

Françoise Pascal is probably best known to British viewers for her role in the TV series ‘Mind Your Language’. Hugues Quester, who apparently did not get on with Rollin and had his name removed from posters at the time, would go on to appear in Serge Gainsbourg’s brilliant Je t’aime moi non plus (1976) and Krysztof Kieslowski’s Three Colours: Blue (1993), among others.

Most of La Rose de Fer was actually shot overnight, which is something of a double-edge sword. On the one hand it’s a nice change from unconvincing ‘day for night’ shots we often see in films from this period. It does make lighting much more difficult though, as discussed above.

With regards to a bibliography, I consulted the following in preparing this piece:

The interviews with Natalie Perrey and Francoise Pascal which appeared on the aforementioned blu ray release.