Many of the pieces on this blog adopt something approximating auteur theory, and that seems reasonable given the films and directors discussed. Franco and Rollin tended to write or at least contribute to the writing of ‘their’ films, so we can be confident the recurring themes and visual motifs represent their preferences and / or obsessions. It seems to me that Radley Metzger is a different kind of director – clearly more accomplished – a director whose signature lays more in the craft than the content of the films that bear his name.

A graduate of City College New York who served in the airforce as a young man, Metzger’s initial involvement in the film industry came courtesy of Janus Films, for whom he edited trailers to promote the likes of Antonioni and Truffaut. In 1961 he formed Audubon Films with his partner Ava Leighton, and proceeded to distribute imported films as an independent, often re-editing and even shooting supplementary footage for them himself. His directorial debut – Dark Odyssey – also dates from 1961, with the first of his major works coming in 1968, with Therese and Isabelle. Camille 2000 (1969) was his sixth feature.

Marguerite Gautier (Danièle Gaubert) lives life in the moment, drifting from party to party with champagne in hand, her sweet life funded by her many suitors. Armand Duval (Nino Castelnuovo) is new to Rome, an eligible bachelor in town for the summer, eager for a guide and immediately smitten with the gorgeous, seemingly out of bounds Marguerite. There are early indications that all is not well with her – we see her chasing champagne with pills and collapsing at a party thereafter – but Armand is not to be dissuaded, not by her warnings or those of his friends.

“The hills are covered with the bodies of the men she’s ruined.”

Based on the novel by Alexandre Dumas fils, Camille 2000 is a ravishing film, a sensory delight that engages from the first moment to the last. Metzger’s films were not big budget affairs – they were not studio pictures – but shooting in Europe, with Europeans in front of and behind the camera, afforded them a look and feel which would have been impossible in the US.

It was shot in and around Rome at the tail end of 1968, and the city – beautifully rendered by Ennio Guarnieri – is as integral to Camille as it is to La Dolce Vita (1960).  Guarnieri’s contributions really cannot be overstated, as the film is full of elegant tracking shots, of shots from hills and terraces, of the beautiful people with the city stretched out behind them. It seems fitting that his name is one of the first things we see on screen, alongside Metzger’s, on the clapperboard which snaps the film into life.

The director was also keen to give credit to Enrico Sabbatini, whose art direction is another key component of the film’s visual palette. Marguerite’s private quarters, for instance – entirely white, accented with mirrors, transparent and inflatable furnishings – stands in stark contrast to the neo-classical interiors seen elsewhere, marking out the new amid the grandeur of the old. The costumes are also evidence of his contributions and add to the luxuriant air, with daring S&M outfits, sheer gowns and beautifully tailored formal ware.

The third major contributor – confining ourselves to those behind the camera for the time being – is of course Piero Piccioni, whose fantastic score breathes life into the party scenes and underlines the melancholy of the quieter moments. Comprising jazz, psychedelia and sweeping orchestration, it’s among the most memorable of the era and the film simply wouldn’t be the same without it.

“Life is too delightful to waste on being bitter.”

Surrounded by world class talent, it seems to me the role of the director is closer to that of a band leader than a composer, selecting and shaping material, establishing tone and working with the players. Metzger acknowledged that his route to the director’s chair was technical, which is why he tended to adapt exisitng narratives, in this case ‘The Lady of the Camellias’. It’s an exquisitely cinematic adaptation though, with carefully choreographed set-pieces incorporating dancing, diegetic music and, of course, sex.

The forethought and attention to detail are also striking, as evidenced by the juxtaposition of Marguerite declaring her fidelity in the foreground while a funeral procession – barely perceptible unless you’re paying attention- takes place on the streets below. Elsewhere we have Armand and his rival Count de Varville – respective status indicated by the former’s cigarette and the latter’s cigar – playing cards for high stakes, a sort of jet set fist fight, and the famous scene in which the camera’s focus shifts between Marguerite and a camellia in time with her breathing.

Of course, it’s not perfect – few films are. There are times when it tips over into melodrama, such as when Armand’s father (Massimo Serato) tells Marguerite that she should leave his son now, if she truly loves him. More problematic is a scene in a hospital towards the end of the film, a scene I wont spoil here but which is perhaps a little heavy-handed. I also wonder about the portrayal of Marguerite’s drug use, which could at times be interpreted as treating an underlying condition, rather than being one. Perhaps that’s deliberate though, representative of the addict’s dependence on the very thing that is debilitating them.

Thinking more broadly about the content, Metzger is considered to be a director of erotic films, and with some justification. The overwhelming majority depict sexuality to one degree or another and Camille is no different in that regard. The director himself has explained this in terms of attracting an audience, in terms of independent filmmakers relying on horror and / or eroticism to draw attention to their work, so one might be surprised at how little nudity there is here. There is no shortage of sex scenes though, and they’re as carefully executed as the bits ‘in between’, perhaps more so.

The first occurs around the half hour mark, as Marguerite and Armand act on the obvious chemistry between them. It’s shown entirely via the mirrors which adorn her bedroom walls, and similar technique is used shortly thereafter, although this time their images are captured by a mirror on the ceiling. Actually a number of the more intimate scenes – scenes of dialogue between Marguerite and her two principle suitors – play out in front of those mirrors, multiplying the figures on display to four, six, even eight. It’s a striking stylistic move and perhaps something more, suggesting – actually presenting – multiple perspectives on the drama as it unfolds. 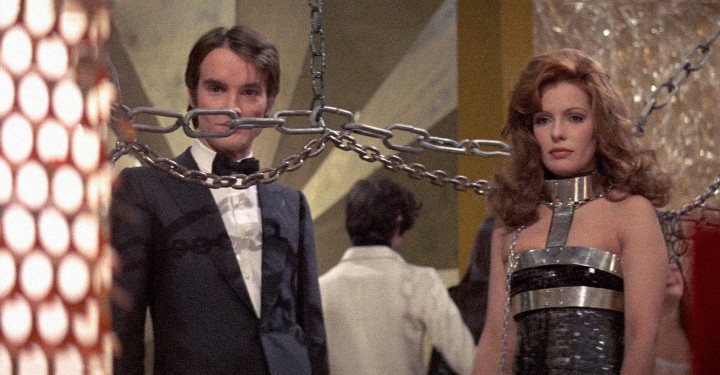 Speaking of the figures in front of the camera, it would be remiss of me to ignore the cast, having spent so much time extolling the virtues of those who set them up to succeed. Danièle Gaubert dominates every scene she’s in as the doomed Marguerite, and Nico Castelnuovo – probably best known for appearing opposite Catherine Deneuve in The Umbrellas of Cherbourg (1964) – is plausible enough as the man intent on saving her. Silvana Venturelli – who would go on to star in Metzger’s next feature, The Lickerish Quartet (1970) – is a sight to behold as party girl ‘Olympe’, and Phillipe Fourquet exudes a suitably aristocratic arrogance as Count de Varville. I wouldn’t want to overstate the case and don’t imagine for a moment the film is considered reference material by budding thespians. It is quite emotionally resonant though, and the cast deserve some credit for that.

“Our little voyage has ended. The boat has docked.”

Metzger would continue to demonstrate his brilliance as the sixties gave way to the seventies, before ultimately adapting to the demands of the market, adopting a pseudonym and transitioning to hardcore. Even then, with reduced budgets and arguably less talent around him, he would make memorable movies and outshine his contemporaries. There is a once in a lifetime feel to Camille 2000 though, a sense that the stars aligned and the right people were in the right place, at exactly the right time.

I have always believed Camille 2000 to be Metzger’s sixth film, though the IMDB indicates he directed two films in 1964, neither of which are known to me. He apparently contributed uncredited inserts to one, which is perfectly possible. I have no idea what the other is though, something called ‘Dictionary of Sex’.

Fellini’s La Dolce Vita, which portrays – among other things – the Roman elite at the start of the sixties, would make an interesting albeit lengthy double-feature with Camille 2000.

It occurs to me that I have not mentioned Michael DeForrest’s screenplay, which is well-structured and full of memorable dialogue.

Two of the best performances are actually by Massimo Serato, as Armand’s father, and Eleonora Rossi Drago as Marguerite’s friend and mentor Prudence.

Metzger’s The Opening of Misty Beethoven – often cited as the best hardcore movie ever made – bears certain structural and thematic similarities to Camille 2000.

It surprises me that no-one has written a book about Metzger, and I can find little in the way of critical essays. The following were helpful in preparing this piece though.