“I am dust; a dead thing that cannot die.”

Jamie Gillis takes the role of Dracula, who we first encounter presiding joylessly over a banquet in 16th century Transylvania. Goaded by his shameless guests – and possibly suffering from an excessive intake of alcohol – he drags his beloved Surka (Samantha Fox) from the sanctity of her quarters and brutally rapes her. Chaste, moral and unable to cope with the ordeal, she takes her own life, and in doing so condemns the grieving Count to an eternal craving.

Switching to the present day, we find a melancholy Dracula contemplating a future in the United States – an unlikely dream that becomes reality thanks to a cultural exchange program. It’s here that he meets Sally (again, Samantha Fox) – the image of his long-lost Surka. However, their subsequent romance is not all it seems, as unbeknown to the Count, Sally is embroiled in the murky world of international espionage. 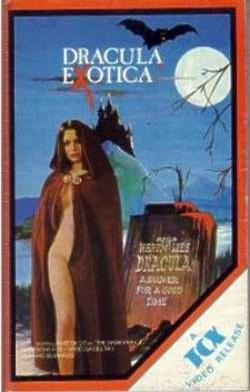 A long way from the ‘one day wonders’ on which the Costello cut his directorial teeth, Dracula Exotica is a (relatively) lavish adult feature that succeeds on a number of levels. Generically a comedy – unlikely as that might sound – the film’s strongest suit is not its sense of humour but its ability to accommodate seemingly disparate elements. Dracula’s plight – the four hundred years of loneliness – lends poignancy to his pursuit of Sally and provides an unlikely emotional resonance. That’s not to say the comedic elements are unsuccessful or inconsequential, but the film is considerably more than a one-dimensional farce. Much of the credit for this must go to producer Ken Schwartz and his excellent screenplay, which is more interested in Dracula’s longing (and the machinations of international relations) than the clichés of Vampirism. Indeed, for a film featuring the undead there’s surprisingly little violence herein, with Vanessa Del Rio’s character being the only one to show any great interest in blood-sucking.

Of course an engaging script and effective direction can be undermined by an incompetent cast, but that’s not really a problem here. The two leads are among the most respected in the field, and although they’ve done better work elsewhere, have the presence to succeed in potentially difficult roles. Indeed, in the relatively closed world of adult cinema, there’s no-one better suited to the role of the Count than Gillis. He may not be Christopher Lee – or even Udo Kier – but he brings a volatility and brooding carnality to the heart of the film.

“Evil, lust and death lurk within my cloak.”

I’m in danger of making this sound like some kind of crossover movie, and it really isn’t. For a start, we need to remember that even the most opulent adult films are low in budget by mainstream standards and this is manifest in some pretty unconvincing action sequences. The film’s content is also going to be problematic for some viewers, with incest and necrophilia featuring prominently at different points. The scene is which Sally – complete with pigtails and lollipop – plays out a Father/ Daughter fantasy with an anonymous Albanian agent (Bobby Astyr), is clearly played for laughs. Nevertheless, him coaxing her to ‘kiss the snake’ is, shall we say, out of step with contemporary mores. With regards to necrophilia, this is an explicit vampire film, but the scene in which morgue attendant Herschel Savage has sex with Vanessa Del Rio’s prostrate body is still quite daring. That said, Costello’s films are noted for their outrageous content, and there’s nothing here to match the carnage of, say, Dominatrix Without Mercy (1976) or Waterpower (1977).

Dracula Exotica is ultimately something of a hybrid – as unusual an adult film as it is a vampire film – and all the more interesting as a result. It’s intermittently amusing, surprisingly romantic and generally quite engrossing. I suppose it’s a little episodic during the middle third – and certainly not Costello’s most challenging work – but there’s plenty of talent on display, both behind and in front of the camera. Indeed, it would be twenty years before a better adult vampire film would appear in the form of James Avalon’s Vampyres.